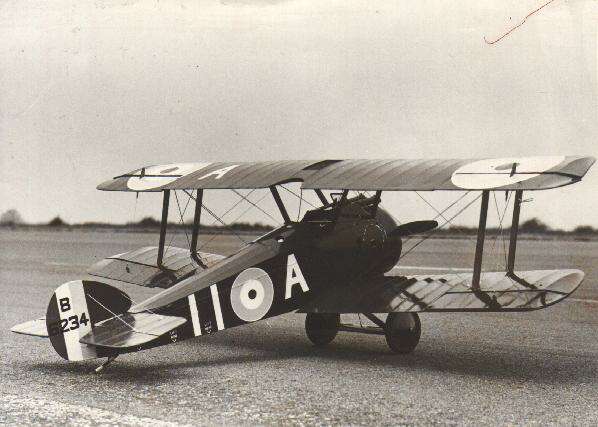 The model represents Camel No. B6234, operated by No. 3 Squadron, Royal Flying Corps in 1917. This aeroplane was
brought down intact behind German lines and its pilot taken prisoner.

Structure: The fuselage is a spruce frame covered with fabric. The wings have spruce spars with 3/32in balsa ribs.
The tailplane and fin are built-up balsa structures. All fabric covering is Japanese silk.

This model was built from a V.K. kit. This is a very close to scale design and I made a few slight modifications to
outlines etc. to bring it exactly into line with a good set of scale drawings.

Flying characteristics: The full-size camel had a nasty reputation for instability. The model does not reflect this at all
being stable and easily controlled. All the basic aerobatic manoeuvres are possible and it may even be steered on rudder without using the ailerons. Landings are tricky due to the tall, narrow track undercarriage. On grass it is easy to tip it over. The covering causes problems. I used silk to keep it light, but found that the slightest flexing of the structure (such as happens when the model noses over) caused the silk to split in several places. This leads to constant repair work to fabric and paintwork.

First flown in 1982 this model won a few prizes at scale fly-ins. It was for a few months exhibited in the Manchester Air and Space Museum (now the air and space gallery of the Manchester Museum of Science and Industry).

Current status: Sold some years ago through a model shop. Present whereabouts unknown.